A traditional Jazz Band for hire in Surbiton to play live music for your party entertainment.

One of the most entertaining party bands that can be booked in Surbiton.
They play well known jazz standards, blues, and popular tunes of the early 20th century.

The twenties style striped blazers and straw boaters, one of the smartest jazz bands in Surbiton.

To book this Surbiton jazz band.

Acoustic Jass's New Orleans Jazz style means that the classic jazz tunes have a beginning a middle and an end, and are great for concerts, dancing or just as background music anywhere in Surbiton.

These experienced musicians have been hired to provided live entertainment for :-

Acoustic Jass has played for weddings and wedding receptions in Surbiton at:-

Like all acoustic wedding bands for hire in Surbiton they can play exciting party music indoors and outdoors and can move between as required.

This jazz quartet was has performed at venues large and small in Surbiton and has been hired to provided music entertainment for all sizes of audiences from lunch and dinner parties of thirty people, to corporate events with up to seven hundred and fifty people (they did use PA there). This classic jazz ensemble once performed for a party of six people in their front room.

Visit their gigs page so that you can see if they are available in Surbiton on the the date you would like to book them or, to see where you can come and hear this jazz quartet.

Visit their gigs done page to find out where else in Surbiton these experienced professional jazz musicians have played. 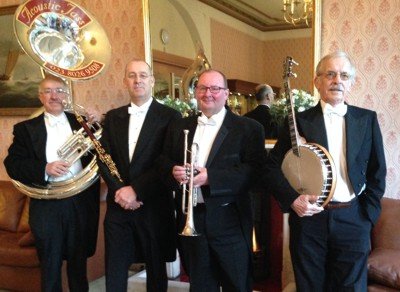 These musicians in white tie and tails at a birthday party

Traditional Jazz is the name applied to the earliest form of music that jazz bands played in New Orleans, it was very popular in the nineteen twenties as a social music, where jazz bands entertained at any social gathering, from being the entertainment at a picnic or for dancing in the dance halls.

Early live jazz was usually played by small jazz bands of up to seven musicians. It is an improvisational music where each player in the band re-arranges the tune as they play. If you hear the same band perform the same tune twice it shouldn't sound the same as the musician improvises to reflect the audience, the event and, how they are feeling.

The original form of jazz had a revival starting in the USA in the ninteen forties with jazz bands spreading across the world and has continued to be a popular and entertaining music today. It became known as trad jazz in the UK.


One of the best Jazz Bands playing in Surbiton

Their repertoire with samples

or fill out the Enquiry form

For more information about Acoustic Jass follow the links below